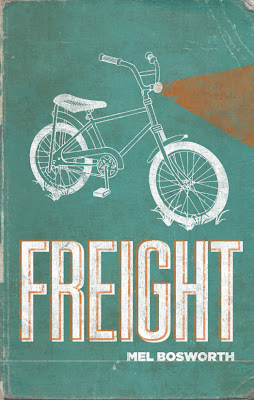 This unflinching, quirky novel follows a flawed yet lovable everyman as he searches for Home. We never learn his name. Nor do we learn her name—the woman whose freight is still too much for him to carry. But we know he likes soft things. We know he works through pain. We know his childhood still clings to him, despite his graying hair. And through knowing him and all his freight, ours is easier to bear.

"In his subtle and delightful debut novel, Bosworth utilizes stylistic elements of childhood "choose your own adventure" stories and applies them to startling effect, with readers able to jump to different points in the text as the main narrative unfolds. Bosworth's nameless everyman protagonist struggles with his love for a woman who has been hurt too many times to trust. He drinks too much and drifts through jobs, but most of this information comes through hints, with Bosworth focusing more on thoughtful, thematic vignettes about subjects including remembrance, love, and destruction. Bosworth repeatedly returns to the idea of putting things down, both in the sense of consuming and internalizing them, and finally letting them go. Readers looking for a straightforward plot won't find it here, but they will appreciate the opportunity to reread the book in new ways. This fantastically innovative novel hints at even greater works to come." —Publishers Weekly

"I loved those choose-your-own-adventure books when I was a kid and now I love Mel Bosworth’s Freight, a formally inventive novel that lets you choose how to read it, skipping back and forth between what happened and what will happen, a kind of page-turning time travel that makes the novel swirl together in wonderful ways." —Michael Kimball, author of Dear Everybody and Us

"Freight moves like a train through a familiar internal landscape where memory and thought detour and derail and yet somehow we end up transported, we end up moved. With spare and urgent prose, Mel Bosworth has written an extraordinary novel that is at once traditional and experimental in all the best ways." —Robert Lopez, author of Asunder

"Honesty is Bosworth's helium. He spits it and we float and glow. When too many writers are hiding behind superficial structures and fondling words rather than emotions, Bosworth's tales slip like soft ash across our souls. Ash can be anything. It can be babies or bombs or helicopters or chinese stars. Ash is the cargo we carry. The freight. What we'll become when the water's burned away. And Bosworth knows how to enter like a single flame to tear out the bad. Evoking Antoine de Saint-Exupéry and F. Scott Fitzgerald, Freight is the kind of bed time story that big people need to hear. Something to remind us that before the bullshit hit, we could nearly be considered real." —Brian Allen Carr, author of Short Bus and Vampire Conditions